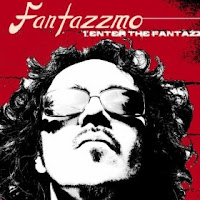 Looking for a new outlet with which to spread his musical wings, former Anima/Idle frontman Sergio Bedolla has taken on the alter ego Fantazzmo and created the multi-styled musical roller coaster that is Fantazzmo I: Enter The Fantazz. Having the feel of a party mixtape, Bedolla experiments with rock, reggae, R&B, ska, funk and hip-hop for this 12 song album. Diversity is the name of the game as he combines genres and instrumentation to come up with something both familiar and fresh. One minute he can be in your face and the next he’s as laid back as can be, never relying on one more than the other. One thing’s for sure though, whether it’s with a powerful vocal, a blistering guitar solo or just a unique instrumental blend, Fantazzmo will grab your attention one way or another.

For Fantazzmo, Bedolla wears his musical influences on his sleeve. Some songs have a distinct 311 feel (“I Know You’re Mine,” “Drown Your Lies” and “Reciprocity”), some have that fluid Carlos Santana touch (“What You Doin’ To Me” and “Always Something”) and some even have an almost Rage Against The Machine guitar tone (“Superman” and “Souls On Ice”). He even spices in some tasty Middle Eastern flavors in “We Are Waiting For You” and some great Pink Floyd psychedelia in “Eternal Abyss” to keep things super interesting. All of these feel much more like acknowledging nods than reproductions though, as Bedolla is quite content to use these as ingredients to cook up his own brand of music. The only song I don’t quite get is the closing instrumental “Cancion De La Gitana.” Using only two acoustic guitars, the track starts off nice but quickly sounds like each guitar was recorded without hearing the other one. Maybe I’m just missing something, but the instrumental abilities found throughout the rest of the album convey a much more talented and melody-minded individual than this last track does. But hey, to each his own. Bedolla makes sure that every song on the album has an unmistakable rhythm and groove to it and with a little track list tweaking, you’ve easily got a ready-made party on your hands.

"I Know You're Mine" - Fantazzmo (Fantazzmo I: Enter The Fantazz)
Posted by Will Hodge at 4:30 PM