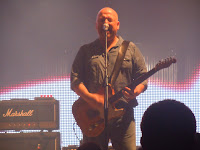 The legendary Ryman Auditorium is certainly no stranger to ringing out with songs about God, death and characters found in the Bible. The Mother Church just isn’t exactly used to the Pixies’ take on them. Oddly enough though, the wooden pews and stained glass windows provided a perfect ambiance for the melodic abrasiveness the Pixies are known for delivering. Continuing to tour for the 20th anniversary of their Doolittle album, front man Frank Black, guitarist Joey Santiago, bassist Kim Deal and drummer David Lovering are treating fans to an incredible concert packed with the entire Doolittle album, B-sides to the Doolittle singles and a few cuts from their other albums. With only one new song released in the last 19 years, there could have easily been a nostalgic air of just running through the hits for some old school fans. This show was anything but that. Fans, including ones that didn’t look old enough to have even been born when Doolittle was released, were on their feet the entire night, even threatening to out sing Frank on most of the songs. 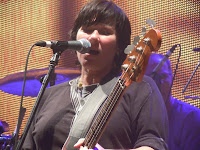 With allusions to surrealism so prevalent in their lyrics, it was no surprise that the show opened with bizarre clips from a surrealist movie playing on the backdrop. The band members appeared to a deafening ovation and opened the show with a quadruple smack of Doolittle B-sides. First up was “Dancing The Manta Ray” and “Weird At My School” from the “Monkey Gone To Heaven” single, followed by “Bailey’s Walk” from the “Here Comes Your Man” single and “Manta Ray,” also from the “Monkey Gone To Heaven” single. With a quick word from Kim Deal, they then launched into “Debaser” and proceeded to play Doolittle all the way through. During the most electrifying moments, the shouts in “Debaser,” the counting section in “Monkey Gone To Heaven” and the sing-a-long chorus of “Here Comes Your Man,” the connection between band and crowd proved that the Pixies still have a strong place in today’s musical landscape. Every section of The Ryman was rocking out and singing along to every wild and unusual lyric. It was incredibly impressive to see such excitement and engagement by the fans for all of the songs, not just the hits. For their first encore, they came back out and played the alternate version of “Wave Of Mutilation” and a fog-enveloped “Into The White,” both from the “Here Comes Your Man” single. For their second encore, they closed the night with some crowd-pleasing cuts from Bossanova, Come On Pilgrim and Surfer Rosa. After exiting the stage for the third time, the crowd, and hopefully the band, knew they had experienced something special. 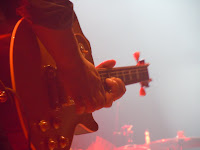 While they have never been accused of being the most active or talkative band while being on stage, their trademarked “loud quiet” musical dynamics and their quirky lyrical themes and deliveries are enough to generate an energetic and animated atmosphere. Frank’s yelping vocals, Joey’s agitated leads, David’s understated drumming and Kim’s hefty basslines blend together to create passionate, frantic, and wholly original music. Eventhough they have never had a platinum record or a #1 hit, it’s easy to see why the Pixies are mentioned by hundreds of musicians as an inspiring and influential band. From the way they approach their songs, to their stage mannerisms, to their simplistic but entertaining backdrop images, the Pixies forego flash and image for character and spirit. While most bands who play by their own rules end up playing to no one, the Pixies prove that, when mixed with substance, individuality can create a community and a shared experience.

Here's the setlist and a few more pictures: 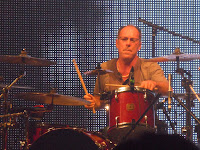 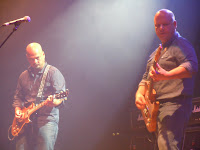 Weird At My School 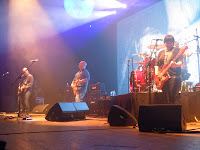 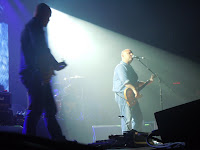 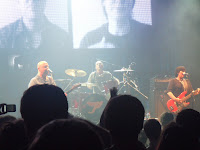 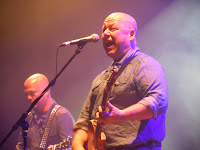 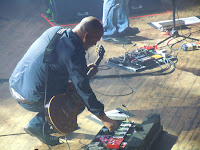 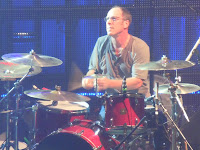 There Goes My Gun 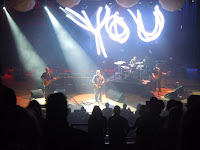 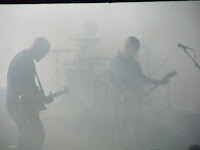 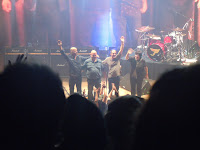 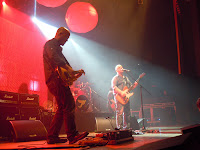 Where Is My Mind?