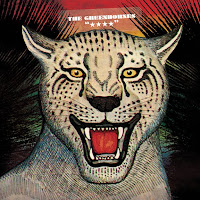 While The Greenhornes may be known mostly for the musical pursuits of their rhythm section, the bluesy, garage rock trio are definitely talented enough to stand on their own merits. Sure, drummer Patrick Keeler and bassist Jack Lawrence are in The Raconteurs together, they played on Loretta Lynn’s Van Lear Rose album and Jack plays bass in The Dead Weather, but before all that, they got their start backing up singer/guitarist Craig Fox to release 4 albums and an EP as The Greenhornes. Well, The Greenhornes are back with a new album and they are ready to hit the road for some shows. The new album is called “★ ★ ★ ★” and it is set for an October release on Third Man Records. The first single “Saying Goodbye” has been released and this 60’s-tinged melodious jam shows that The Greenhornes haven’t missed a step. Their fuzzbox guitars, harmony vocals, rambunctious bass lines and clanging drums are all present and accounted for. “Saying Goodbye” is energetic, raw, moving and fun, just like them. Its infectiousness has me super excited for the new album. The Greenhornes are set to play here in Nashville at The Basement on September 1st and I’m really looking forward to seeing them live for the first time. 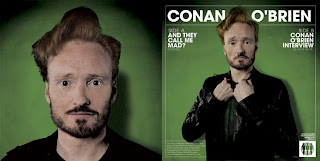 Back in June, Conan O’Brien stopped by Third Man Records and put on an unforgettable concert for 300 or so lucky fans. While he was there, he also recorded a 7” single with a hilarious mic check turned improvised Frankenstein story on one side ("And They Call Me Mad?") and an interview with Jack White on the other. For their vinyl single releases, Third Man presses 150 limited edition tri-color 45s, selling 100 of them at the store and slipping 50 into random online mail orders. Black vinyl copies can be purchased online or at their store at any time. Usually the tri-colors run about $10 or so, but since Conan decided to donate his sales to a relief organization, these tri-colors went for $100. The proceeds are going to ReTune Nashville, a group that’s helping out uninsured musicians who were affected by the Nashville flood earlier this year. It was definitely worth taking a couple hours off from work and standing in the ridiculous heat to pick one of these bad boys up. Not only is it a really cool addition to my record collection, it’s always nice to see a company partner with those who give to people in need. It was also pretty cool of Third Man to hand out water and ice cream to all us sweaty messes in line! The only thing that makes these tri-color sales any better is when they take place in the fall and winter!

You can order the black 7” single from Third Man Records here and you can find out more about ReTune Nashville here.

Here's a pic of the tri-color 7" single: 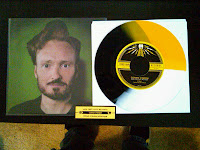 Posted by Will Hodge at 3:59 PM No comments: 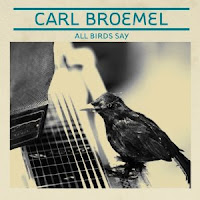 Somewhere in between playing with My Morning Jacket and appearing on albums by folks like Karen Elson, Bobby Bare, Jr. and Cory Chisel, multi-instrumentalist Carl Broemel actually found time to record a solo album. All Birds Say is a mellow collection of alt-country songs that are deeply layered and subtly delivered. Weighty thoughts and complex musical interplay are thinly veiled beneath the unassuming strum of Carl’s guitar and his laid back delivery. His songs are full of lyrical and musical gems to discover if you want to dig in a little, but he’s not concerned with demanding your attention. All Birds Say is the aural equivalent of gently swaying in a hammock between a philosopher and composer and the choice between engaging or just enjoying is fully yours.

Among the 11 tracks on All Birds Say, Carl is credited with playing guitar, pedal steel, bass, dobro, violin, autoharp, baritone sax, percussion and bells. If that’s not enough orchestration for you, he also had some friends come in to play clarinet, basso buffo organ, synthesizer, piano, vibes, trombone and drums. The diversity of the instruments is only matched by the skill with which they are played. There’s a lot going on in the way of musical theory, chord structure and melody but it all comes across smoothly and unpretentiously. The lyrics take the same hidden treasure approach. Some of my favorite lines are, “Let’s not wait around for death to show us how well we have lived, this life leftover is all we get” from “Life Leftover,” “Don’t get carried away in the past, it’s not there” from “Carried Away” and “It takes a lot of time to know your mind, save an hour for yourself” from “Questions.” He’s not above self-criticism and introspection though. In the song “On the Case,” the verses are used to relate the human struggle of getting caught up in yourself enough to miss the important things, while the chorus reminds you that the way you have done things in the past doesn’t have to be the way you do them in the future. All Birds Say is a great album to put on to relax, but be warned, it will eventually inspire thought and conversation before you know it. Carl manages to convey great truth and inspiration without grandstanding. It’s a message without a soapbox, something we could all use more of.

Posted by Will Hodge at 8:52 PM No comments:

Man, music widgets are getting pretty darn cool! First Arcade Fire put out the cool vinyl one for "The Suburbs" and "Month of May" and now Jenny and Johnny have this cassette one for "Big Wave," "Switchblade" and "Scissor Runner." Not only does it look great, we get to hear more new songs from I'm Having Fun Now, due out August 31st.
So, any guesses on who might come out with the cool 8-track widget?
Posted by Will Hodge at 10:48 PM No comments: 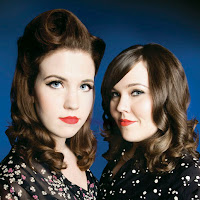 The latest release in Third Man’s 7” Blue Series showcases the outstanding duo The Secret Sisters. Real life siblings Laura and Lydia Rogers are brand new on the music scene but once you hear them sing, you’ll swear they’ve had to have been at this for years. In all actuality they have been singing together for a long time, it’s just been at church, family parties and around their house. But as soon as they decided to pursue it as a career, there’s been no shortage of enthusiasm, excitement and support surrounding these ladies. Their debut album, set for release later this year, is being produced by none other than the legendary T Bone Burnett. But first, they’re putting out a single produced by Jack White. With the vote of confidence from those two working on their stuff, you can bet The Secret Sisters have something special in store for everyone.

Side A of the single is a gloriously raucous cover of Johnny Cash’s “Big River.” Being a fan of Johnny Cash, Jack White and vintage country music as a whole, this track really gets me going. Sung as a duet, Laura and Lydia’s voices have a unique airiness and a crystal clean tone that reminds me of the great country songbirds of the 50’s and 60’s. They have the kind of tight harmonies and unique blending that can only be found in siblings and their vocal chemistry will definitely end up being their calling card. Jack adds some of his unmistakable, unimitatable guitar skills and they whole track sounds really amazing. Side B is a great version of the old folk song “Wabash Cannonball” made famous by The Carter Family. Again, the joint vocals are just incredible and if anyone’s looking for a new group to fill that Andrews Sisters-shaped hole in your life, look no further. While many groups are trying to recreate the sound of the bygone days of golden country oldies, The Secret Sisters are quickly charting their own path to the top of the mountain.

Posted by Will Hodge at 9:42 PM No comments: 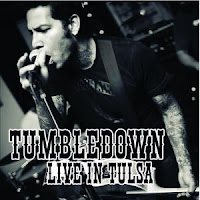 If you get hooked on a band through their studio albums, you run the risk of being disappointed if they can’t pull off the same magic in concert. Luckily for me, Tumbledown’s Live In Tulsa proves that these guys are no studio creation, as they become even more talented and rowdy in a live setting. Recorded at The Marquee last September, Live In Tulsa perfectly captures four guys playing their brand of down home, country-flavored rockabilly for an enthusiastic crowd of club patrons. I admittedly wasn’t surprised that Tumbledown is an incredible live band since I’ve seen Mike Herrera in concert many times before with MxPx. His band mates, Jack Parker (guitar) and the brotherly rhythm section of Harley (drums) and Marshall Trotland (bass), keep freight train time and help Mike’s songs to stomp, wail and weep.

The setlist for Live In Tulsa consists of two songs of their Atlantic City EP, eight songs off their Tumbledown full length, an old MxPx song and three amazing covers. For their original songs, the rumble of “I’m Still Here” and the twang of “State Line” resonate perfectly in the club space and on the album. The MxPx tune, “Rock and Roll Girl,” is a nice nod to Mike’s other band and it translates awesomely to Tumbledown’s hoe down rendition. I’m especially impressed with their cover selections as well. “I’ve Just Seen A Face” by The Beatles already had a country shuffle, but Tumbledown ratchets up the boot stomping tempo to glorious results. Grand Funk Railroad’s “American Band” gets equal treatment, with a fast and fiery cowbell driven version of the classic. In a deft aural example of “knowing your audience,” the guys do a tried and true take of Willie Nelson’s “On The Road Again” that is met with much approval. The album closes with my own personal Tumbledown favorite, “Homeward Bound,” complete with band introductions and solos. I hope these guys can eventually find their way to Nashville so I can witness their power in person. In anticipation, I’m feverishly stocking up on boots to scoot and sorrows to drown.

Live In Tulsa can be purchased from Tumbledown's online merch store HERE.

Posted by Will Hodge at 3:23 PM No comments: