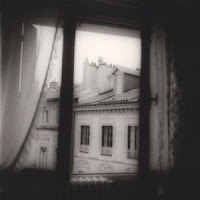 At first listen, Admiral Fell Promises comes across as just a smooth, calming album that would perfectly soundtrack a rainy day or a slow, lazy morning. Mark Kozelek’s resonating voice, accompanied by only a nylon string guitar, glides evenly between high and low registers and never seems to rise above a conversational tone. The finger picked guitar passages give a light, trickling backdrop for his songs to float on. No matter the issue, this album could probably chill you out quicker than any other album out there. If that was where you stopped digging though, you’d be sorely missing out. With repeated listens, you start to find the layers Mark creates and you can see how each song blends seamlessly and intentionally into the next. This isn’t a collection of singles with dynamic musical shifts and attempts at genre variety. Instead of just tracks on an album, these songs feel more like chapters of the same book. They are independent in character but fused together in vision and result.

While the album is attributed to Sun Kil Moon, it’s essentially a Mark Kozelek solo album. He’s the only voice and instrument on the whole album and the effect is mesmerizing. Opening track “Alesund” starts with an expressive minute long guitar solo before his voice enters and sets the tone for the whole album. His lyrics draw you into a story, not so much as a participant, but as an omniscient character reading a personal narrative. While most of the songs have titles dealing with specific places (“Half Moon Bay,” Sam Wong Hotel,” Third and Seneca,” “The Leaning Tree,” “Church of the Pines” and “Bay of Skulls”) the tone and feel of the album allows you to choose where you want to go. There’s enough unobtrusive musical moments and spaces for you to really mentally unplug and get lost in its depths. This type of album benefits most from a straight through listen in its entirety. It’s somehow brooding, resigned and yet still hopeful from beginning to end. While this album wouldn’t be the best jumping off point to expose someone new to Mark’s work, it is incredibly poetic, transportive and a moving addition to his catalog.

Admiral Fell Promises will be available from Caldo Verde Records on July 13th.

"You Are My Sun" - Sun Kil Moon (Admiral Fell Promises)