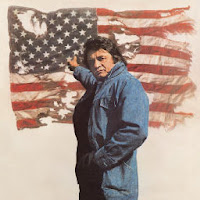 Happy Flag Day to you and yours! While I don’t consider myself super patriotic in the conventional definitions, I do feel a great sense of honor and inclusion when I look at our flag. Sure we’ve had a lot of growing pains as a relatively young country and our government’s historical record includes some pretty hefty blemishes, but those aren’t the things we should hold up against the flag. For me, it represents the spirit of the people who live, work and fight underneath its banner. While our government may portray a sense of entitlement, waste resources and get us into unnecessary wars, our flag allows the individuals who keep the country going to have a collective umbrella under which they are bound together. As a kid growing up in Atlanta, every summer I heard Lee Greenwood’s “God Bless the U.S.A.” as Stonewall Jackson, Jefferson Davis, and Robert E. Lee were animated into motion at the Stone Mountain Laser Show. I understood it, but honestly, it was all a little too cheesy and glossy for me. However, there is one man who knows how to celebrate the flag with honesty and authenticity.

Johnny Cash’s “Ragged Old Flag” came out in 1974 and it’s interesting to see how much times haven’t changed since then. Johnny’s incredible voice makes any topic sound better, but this spoken word song is a narrative between a man in a small, old town and a visitor. The visitor comments on the condition of the town’s flag and the old man proceeds to tell him why the flag looks the way it does. With images evoking America’s major battles and wars, the song reminds us of the struggles and the lives that were lost for the flag and what it represents. The song also deals with the fact that we don’t exactly respect those important things like we should. Back when I was a pudgy, bespectacled young Cub Scout, I remember learning how to properly handle and fold the flag. I remember the way our Scoutmaster explained, not just “how,” but “why” we treat the flag with honor and dignity. I remember the look on his face and the slight quiver in his voice. I also remember feeling the weight of what we were learning and feeling a part of something bigger. I still get reminded of those same feelings every time I hear a song like “Ragged Old Flag.”