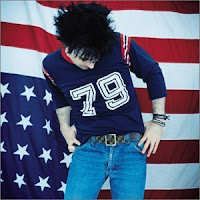 Songs that are written about real geographical locations can sometimes come across as cheesy or forced. For every "Detroit Rock City," there's a "Viva Las Vegas." Springsteen's "Atlantic City" is gritty and gorgeous but "Kokomo" by The Beach Boys will make you question your faith in mankind. It's a fine line to tread for sure but some artists definitely have the gift to successfully champion their city and still write a great song. "New York, New York" by Ryan Adams is a killer alt-country ode to one of his favorite cities and the homage and references come across easy and authentically. He forgoes shout outs to The Statue of Liberty and The Empire State Building for more subtle nods to the Upper West Side, Avenue A, Avenue B, Houston Street, 3rd Street and 10th Street. Ryan shot a video for "New York, New York" with many shots of the city and him playing the song with New York's iconic skyline prominently featured in the background. The video was shot the Friday before the September 11th terrorists attacks. In the weeks following, MTV, VH1 and CMT played the video pretty heavily as a fitting tribute and memorial.