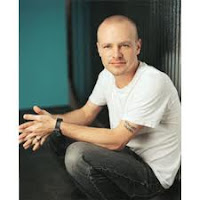 When trying to turn people on to great music, it’s hard to know where to start with someone I’ve listened to and admired for as long as I have Derek Webb. So let’s just start from the beginning. I first heard his music when my youth pastor passed along a cassette single of “This World” by Caedmon’s Call when I was 16. I was deeply immersed in alternative and punk, but I still could respect some good acoustic folk music, which Caedmon’s Call offered in spades. I really dug the song and picked up their self-titled album when it came out. While they nailed the double acoustic, harmony rich, coffee house vibe better than most, what really grabbed me were Derek Webb’s songs. In a band with three prominent singers and an additional non-touring songwriter, Derek really stood out to me with his passionate, emotive vocals and his transparently honest songwriting. He could handle a smooth ballad or belt out a rocker with equal range and gusto. Immediately I knew this was someone worth listening and paying attention to. I went back and picked up their previous album and EP and was first in line for each new release that came out. Derek’s involvement with Caedmon’s Call had a ridiculously huge impact on me throughout those important years of high school, college, getting married and “growing up.”

While Caedmon’s Call was transitioning as a band, Derek released his first solo album, She Must and Shall Go Free, in 2003. The alt-country album was grittier and looser than anything he had done previously and his lyrics followed suite. Becoming even more bold and truthful, he spoke strongly about God, sin, grace, other people and how we should view the relationship between them all. Never one to concern himself with fitting in or pleasing the masses, he has changed up musical styles with each subsequent release, while still continuing to hold our collective feet to the fire with his lyrics. In 2007, he joined back up with Caedmon’s Call for the release of Overdressed. Currently, he’s working on their newest album, Raising Up The Dead, that is set for release later this year, as well as Feedback, another solo album of his. Also, throughout all of this time, he has contributed to the projects of his equally super talented wife, singer-songwriter Sandra McCracken, as a songwriter, instrumentalist and producer. Over the years I have seen him countless times in concert, with Caedmon’s Call, by himself and supporting Sandra, and he has never failed to amaze, impress, entertain and encourage me with his songs, explanations, and charitable involvements. I even got to spend some time with him at his studio right before his last album, Stockholm Syndrome, came out. But that’s a story for another day. Derek is easily in my top three songwriters of all time list and if you ask me on the right day, he could be holding the top spot. In a year or two, I will have crossed the line where I will have been listening to him for more years than I will have not listened to him. Hopefully he will still be in full musical stride, cranking out more songs that tickle the ear and speak directly to the heart. Ever the musical shapeshifter, I’m sure it’ll be a polka jazz or raga punk masterpiece.