My Part-Time Cover: "Don't Think Twice, It's All Right" 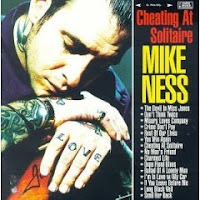 I really, really love a well done cover song. Most bands do cover songs in concert for fun or as a nod to a musical hero but actually recording one for an album takes a little more gumption. Especially if you are covering a well known song by a well known artist. It opens you up for immediate scrutiny because people are so used to the original and will undoubtedly put the two versions up against each other. When Social Distortion’s front man Mike Ness decided to record an album that was more roots-rock based, he decided to cover Bob Dylan, Hank Williams and a song usually associated with Johnny Cash. That, my friends, is gumption.

Bob Dylan wrote “Don’t Think Twice, It’s All Right” in 1962 during a tough time in his relationship with Suze Rotolo. It was written as a kiss-off to make himself feel better about her wanting to stay in Italy without him. Accompanied by only a finger-picked guitar and a harmonica, Bob delivers the stinging lines with the perfect mix of attitude and apathy. He really captures the hurt, anger and feigned detachment that goes along with a break up. It’s really cool to get a glimpse of Bob’s personal side on an album that was so full of political and societal giants like “Blowin’ In The Wind,” “A Hard Rains A-Gonna Fall,” “Master Of War” and “Oxford Town.” Ironically, “Don’t Think Twice, It’s All Right” appears on The Freewheelin’ Bob Dylan, which features Bob and Suze walking arm in arm on the cover.

Mike Ness released his version of “Don’t Think Twice, It’s All Right” (shortened to just “Don’t Think Twice”) on his first solo album, Cheating At Solitaire, in 1999. Social Distortion always has flavors of country and blues in it’s punk offerings, but Mike really wanted to do a proper rockabilly/country/rock/roots album. Picking up the tempo and adding a full band, Mike creates even more snarl to go along with the lyrics. I think he really holds true to the original sentiment of the song while still being able to put his own spin on it. I still remember where I was when I first heard this song. I was a cook at Buffalo's Cafe and Mike was on the radio doing an interview for 99x. He played it acoustically and then they played the album version. I must admit, the customers had to wait just a few minutes longer for their food that day because I was momentarily distracted by a song that is still, to this day, one of my favorite covers.