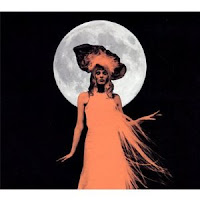 Karen Elson's debut album, The Ghost Who Walks, is an ambitious slice of gothic folk goodness that mixes the blues, murder ballads, folky country and some theatrical elements to create a restless and unique musical experience. Karen has flirted with a musical career before when she recorded a duet with Cat Power in 2006 and also founded the cabaret inspired The Citizen Band, but she has finally pulled the trigger by writing and recording The Ghost Who Walks. Produced by husband Jack White, who also plays drums on the album, and backed by a stellar band consisting of Rachelle Garniez (The Citizen Band), Jack Lawrence (The Raconteurs, The Dead Weather), Carl Broemel (My Morning Jacket) and Jackson Smith (Back In Spades, Patti Smith), Karen weaves her vocals and guitar playing through a 12 song set, of which she wrote all but one song.

Any raised eyebrows or condescending whispers of "Mrs. Jack White" are quickly squashed as soon as her reverb-drenced voice echoes out over the organ lines of opening track "The Ghost Who Walks". This haunting murder ballad shows Karen's knack for storytelling, as well as her ability to command a song, no matter how eclectic the instrumentation may be. As the album progresses, she effortlessly slips in and out of many musical vibes without ever losing the common thread of her wispy delivery and her narrative songwriting. Some songs evoke the ghosts of old country music ("The Last Laugh" and "Cruel Summer"), some sound as if they are echoing from an abandoned Parisian cafe ("Stolen Roses" and "Lunasa", which was written by band mate Rachelle Garniez) and some sound like they could be played as intermission music at the most interesting carnival you could ever hope to attend ("100 Years From Now" and "The Truth Is In The Dirt").

Although the songs are brand new, they feel passed down and lived in. They are from the same fabric as old spirituals or A.P. Carter standards, but they still have their own hues and designs with which to create their own spaces. These are the kinds of songs that take root in you and last long after the record has stopped spinning. Although each song can easily be enjoyed on it's own, this is not an album of disjointed singles. It's an album meant to be listened to, and is best enjoyed, in whole. The Ghost Who Walks is the musical equivalent of opening up an old steamer trunk that's been stored away for generations and finding styles and designs that no one has ever seen before. The instruments, the stories and Karen's voice all mix to create an antiqued freshness that is rarely found on albums made within the last 50 years or so. Who needs ghost stories when you've got ghost songs?