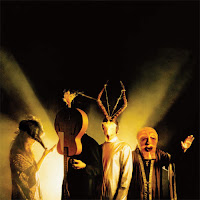 So, Monday was pretty awesome. Amanda and I got to go to The Dead Weather show at Third Man Records and it was incredibly awesome and incredibly loud. I’m pretty sure my ears are still ringing. It was a small scale, guest list only show to promote their new album, Sea Of Cowards, which comes out on May 11th. They streamed it live for a few different places online and also recorded it to analog tape for a vinyl only release. Those of us who attended the show got the chance to purchase a copy on dual-colored black and blue vinyl and they are also going to sell a black only vinyl through the Third Man shop. Those Third Man folks really know how to do things up right!

It was announced that they would play the new album straight through and that’s what they did, stopping only to allow the recording engineer to change the tape. I had already heard each song a few times since they streamed the album for a 24-hour period a couple days before the show, so I was really excited. The two songs I was looking forward to the most were “Old Mary” and “Blue Blood Blues”, if for nothing else than to hear Jack White’s delivery of the line “All the white girls trip when I sing in Sunday service.” Hearing it over some computer speakers was nothing compared to how it sounded live though. I know it sounds oxymoronic, but these guys played so tight and so loose at the same time. They laid such a solid groove and the crowd was moving the whole time. Jack White seems to be having a great time behind the drums and he is certainly the heart beat, musical and otherwise, of the band. Jack Lawrence is one of those unsung bass players who is really, really good but doesn’t seem to get enough credit. He veers enough from the typical root note approach to keep it interesting without sounding like he’s playing a completely different song. One of the more complex riffs he played even involved his thumb climbing over the neck to hit the low string. Intricate and tasty, one of my favorite combos! The one I was most impressed with though is Dean Fertita. Playing both keys and guitar, usually in the same song, he really is responsible for holding down the melodic vibe of the songs. He was zoned in all night and there were times where each hand was on a different instrument. It was an impressive performance to say the least.

They played the entire album, in order, and then came back for a three song encore consisting of “Hang You From The Heavens,” “I Cut Like A Buffalo” (my personal favorite) and “Treat Me Like Your Mother.” The encore was as blistering as the opening set and everyone, band included, seemed to have a really good time. I’ll post a picture of the black and blue vinyl once it gets pressed.

Sea Of Cowards will be released on May 11th and if you like bluesy, riff-based, groove rock, you will love this album. I highly recommend picking it up!