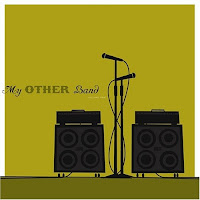 Have you ever heard a new song and gotten ridiculously excited about the band? Not just, "this song is pretty cool" but more of "YES! I've been waiting to hear a band like this for a long time, when's the album coming out and how do I start a fan club!" This was my reaction to hearing My Red Hot Nightmare for the first time. Punk rock with killer hooks, gritty guitar tones and sneering vocals make me a very happy boy. Taking the best parts of The Clash, Rancid, and Dropkick Murphys, My Red Hot Nightmare was loud, exciting and made you want to grab somebody's neck and sing some gang vocals at the top of your lungs.

I was introduced to My Red Hot Nightmare on a compilation album called My Other Band, Volume 1 put out by Mono Vs. Stereo in 2006. It's a pretty cool album concept because it's made up of side project bands of guys who were already doing pretty well in their respective bands; Relient K, Bleach, Audio Adrenaline, and The Supertones. My Red Hot Nightmare was made up of punk journeyman Ethan Luck and Dan Spencer from The Supertones. Their 3 tracks opened the album and jacked me up with anticipation for a full release. But alas, besides a track on a Superdrag compilation album, it wasn't in the cards for My Red Hot Nightmare to exist outside of this album. So sad! There was so much potential in the songs they put out and I really wish something could've happened for them. Ethan is currently drumming for Relient K and also runs Rebel Waltz Recording Company with Dan. If they ever decide to pick up My Red Hot Nightmare again, you can bet I'll be throwing my hat in the ring for fan club president!