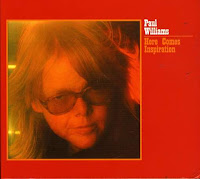 “Pay no attention to that man behind the curtain.”

Songwriters can usually be split into three camps; those who just write, those who write and perform, and those who write and wish they could perform. There have been many songwriters in that last camp whose great songs have gone much further than they themselves ever did as an artist. For any number of reasons, they didn’t make as big of a splash performing as their songs made being performed by other bands. There seemed to be no shortage of these cats in the 70’s.