One Man, Many Bands - Aaron Sprinkle 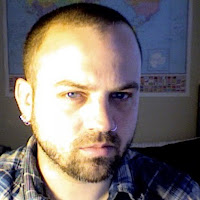 I respect and enjoy a ton of musicians but there are some folks that I just hold up a lot higher than everyone else. Aaron Sprinkle is definitely one of those people. Lucky for me, the man has been consistently putting out music for the last 20 years and shows no signs of slowing down! Hailing from Seattle, Aaron is a singer/songwriter/guitarist/producer/musical genius/studio wizard who is immensely creative and ridiculously talented. Whether it’s his vast production resume or the different bands he has been in over the years, his Midas touch is felt throughout each project. The man IS music. Here’s a quick rundown of the bands he has been in.

Poor Old Lu – Poor Old Lu was birthed out of a band called BellBangVilla when Aaron was in high school. BellBangVilla had one release, In Love with the Greenery, but they eventually became Poor Old Lu when Aaron’s brother Jesse joined up to play drums. Poor Old Lu was a big fixture in the Christian alternative scene of the 90’s and released 7 full lengths and an EP during their career. My first exposure to them was in 1994 when I bought their album Sin simply because I thought the cover looked cool. That serendipitous move was the start of becoming a life long fan of Aaron’s work. His guitar playing and sense of melody, even as a teenager, was awesome and very inspiring. Aaron wasn’t the singer, but when I heard him sing lead on a track called “Ring True” I wondered why he wasn’t. No offense to Scott, but something in Aaron’s voice hooked me. I was lucky enough to catch Poor Old Lu in concert in 1995, which was a big deal for me since they didn’t make it to the Southeast very much. They broke up in 1996 and briefly reformed in 2002. Not only were they an awesome band, they named themselves from a line in the book The Lion, the Witch and the Wardrobe, which scored some nerd points with me!


Rose Blossom Punch – While still in Poor Old Lu, Aaron released a couple of songs under the name Rose Blossom Punch on some Tooth and Nail Records compilations. When Poor Old Lu officially broke up, he was able to work on Rose Blossom Punch full time. They released Ephemere in 1997 but label troubles caused the band to fizzle out and their next (and final) release, Sorry To Disappoint You, was delayed for a while but eventually showed up as a digital only release in 2000. I really liked the potential in Rose Blossom Punch but they never really had a chance to get off the ground.

"A Step In The Dark" - Rose Blossom Punch (Ephemere)


Solo – Freeing himself from the constraints of a band apparently agreed with Aaron. He released his first solo album, Moontraveler, in 1999 and I was blown away. Marriage, a kid and life in general allowed his songwriting to somehow become even more amazing than what it already was. Around this time I was also experiencing some life shifts like going to college, getting married and trying to finding a real job, so his albums were really resonating with me on a lot of levels. His song “Really Something” is one of my favorites and lines as simple as “some days I actually forget that this is really something, one smile from you and that is it, this is really something”, were very impactful to this immature guy trying to figure out how to be an attentive, loving husband. In fact, I’m still learning so they continue to stir inside me and probably will for a long time to come. I got to see Aaron perform by himself last summer when he was in town to produce The Almost’s newest record. Amanda and I were both so incredibly stoked to see him and he didn’t disappoint. I can only hope that I’ll be lucky enough to see him play again sometime. Playing all the instruments except drums, Aaron has put out 5 full length albums and one stellar EP. Since there are no worries about breaking up as a solo artist, hopefully there will be even more releases down the road.

Fair – Aaron eventually got the itch to be in a band again and Fair was formed in 2005. Fair is a little more pop-based than his previous bands, but fear not, they still rock. It’s really good to hear Aaron singing over some crunching power chords again and he also sounds great on their airier, atmospheric keys-based stuff. Fair just released their newest album, Disappearing World, last month and it’s another winner. A new album usually means a new tour and if so, hopefully they will find their way to this side of the continent.


Besides his duties in Fair and working on solo stuff, Aaron always seems to be in the studio producing somebody. He is the “in house” producer for Tooth and Nail Records and mostly works out of Compound Studios in Seattle. Any band would be lucky to work with him and those that do end up with something better than what they started out with. I can’t say enough good things about him so just do me a favor and go check him out! If you’re a fan of good music, you’ll be glad you did.