"I Only Said" - My Bloody Valentine 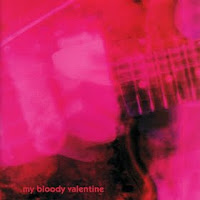 My Bloody Valentine is one of those bands that starts something no one else is really doing and then bands who imitate it usually get to enjoy more success. They released two albums in the late 80’s and early 90’s and if you’ve ever heard the term shoegaze or noise pop it was probably applied to

My Bloody Valentine first. Using massive amounts of distortion, reverb and other guitar effects, Kevin Shields carved a different path of guitar playing. One of his signatures was holding the tremolo arm of the guitar while he was strumming, which created a very loose, swimmy, not exactly out of tune but not exactly in tune way of playing. This was combined with lo-fi production attitudes and buried, layered vocals to create a sound that was very unique to them.

I first heard of My Bloody Valentine by tuning into the late night DJs on Georgia Tech’s college radio station, 91.1 WREK in Atlanta. I never knew what My Bloody Valentine were singing or what the names of their songs were, but you would eventually get to a point where you knew it was them because they were so original. College DJs aren’t really known for mentioning song names but I remember the album title Loveless being mentioned over and over again. My parents would’ve never bought me an album by a band named My Bloody Valentine so I had to try to tape their songs off the radio. For years I only had 3 of their songs, “When You Sleep”, “I Only Said” and “Soon” on a bootleg cassette tape. Eventually I was able to pick up the full Loveless album in the mid 90’s after I got my first job. By this time though, other bands were copying them so they didn’t sounds as fresh to my ears as they deserved. Over the years though I have been able to see what they were doing in context with what was going on around them and I think it’s a pretty cool thing to see trailblazers unafraid to do their own thing. I have also learned a lot about their unique studio production techniques and even if you don’t like them, there is a lot that can be learned from their avant-garde approaches. My Bloody Valentine reformed in 2007 to play some shows but so far no new albums have surfaced.

"I Only Said" - My Bloody Valentine (Loveless)

For any gearheads out there, here is Kevin’s pedalboard from his most recent shows: 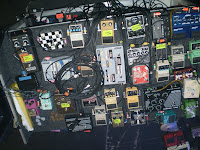