"Ground On Down" - Ben Harper 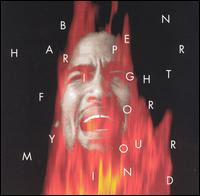 My sister started her first semester of college at West Georgia University in the fall of 1994. Never one to let a learning opportunity go by, I gained 2 important insights while helping her move in during her first day on campus. First, if you are lucky enough to be selected to go get the mini-fridge from campus housing, take a vehicle. Sure, the mini-fridge isn't that heavy during short distances, but a 4 block trip on foot can make that thing feel like it came fully loaded with an entire semester's supply of ramen noodles and Yoo-Hoo. Second, if a welcome wagon is handing out pamphlets and a free cassette tape, ALWAYS take it! It doesn't matter if you have heard of everyone on it; just grab it, decline the credit card application and keep moving.

After we finished moving her in, I crashed back in the car and loaded my new compilation into my Walkman to see what was on it. Reading over the liner notes I discovered some new band names like Material Issue, Spearhead and someone who would become one of my favorites over the years, Ben Harper. His offering for the sampler was "Ground On Down" off of Fight For Your Mind and I was not prepared for the awesomeness that erupted from my headphones.

The track opens with what sounds like an other-worldly slide guitar called a weissenborn. Not too many people play them and NOBODY plays them like Ben Harper. He sounds like Jimi Hendrix, Duane Allman and Robert Johnson rolled together, stuffed with firecrackers, lit on fire and thrown into a sea of gasoline. Absolutely electrifying and fun to listen to! For "Ground On Down" he plays around with a few chords and then lays into a killer groove that you can't help but move along to. His band, especially his bass player, create so much funk dripping out of your speakers that you may feel the need to wipe them down after the song is done. Seriously, it's that thick. I don't know how but somehow he also manages to sing while playing like a beautiful, maniac, genius, freak boy as well. It's quite a sight to behold.

He's not just gifted musically though. He is a great songwriter and his lyrics are filled with meaningful examples of love, struggle, empowerment, vulnerability, spirituality and intelligence. Take this line from "Ground On Down" for example: "Life is short and if you're looking for extension with your time you had best do well. 'Cause there's good deeds and there's good intentions and they're as far apart as heaven and hell." Man, song or sermon? You could chew on those thoughts for a while and still not get to all the layers! Ben Harper can rock your mind, your body, and your heart and his songs will go as deep as you let them. So consider yourself warned! He'll get you dancing, thinking, loving, caring and doing something about things before you know what hit you!