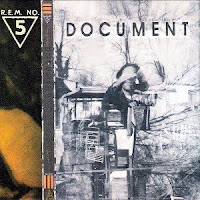 For my birthday my awesome friends Vic and Becca got me a gift certificate to Grimey's, my favorite record store in Nashville. I picked up 3 albums by The Beatles (Revolver, Yellow Submarine, and Let It Be), Cyndi Lauper's She's So Unusual and R.E.M.'s Document. Needless to say, there was much rejoicing.

My love for R.E.M. can be traced back to one of Atlanta's great college-run radio stations, Georgia State University's 88.5 (WRAS). As a kid, I thought it was pretty cool to be listening to a college radio station and hearing things that wouldn't make it to Top 40 radio and barely blipped on MTV's radar. I'm sure I only started listening to it because I heard some older kids talk about it and I wanted to be cool like them, but I eventually got hooked. College radio stations are like a melting pot and sometimes tuning in would land you on some of the weirdest smooth jazz, electronica or blues music you could ever hear. Lucky for me though, most of the late night DJs were into alternative and punk music. 88.5 opened up a world full of DIY attitudes, lo-fi production, clever lyrics, distorted guitars, and unconventional song structures that I never knew existed. I wasn't always sure what I was listening to, but I was sure that I connected with it and I liked it. Being from Athens, R.E.M. got a lot of love on 88.5 and as a result, I got exposed to an incredible band during their, and my, early years.

Document is R.E.M.'s fifth album and was released in 1987. Although I never owned an R.E.M. album until 1991's Out Of Time, I got to know pretty much all of Document because 88.5 played singles and album cuts. Having a blank tape always cued up to record eventually got me most of the songs I wanted! One of the tracks that has always stuck with me is "Finest Worksong" and I think it's a classic album opener. As soon as that opening snare hits, I'm pumped and ready to go. Like most R.E.M. songs, I have no idea what Michael Stipe is singing about, but on this one he's at least understandable enough to sing along with. As an added bonus, the musical groove is ridiculously sick.

Being the unabashed dork that I am, I used to make my parents listen to this song whenever one of them would drive me to my first job as a Kroger bag boy. For some reason, I remember feeling that the two were linked and that I was somehow joining myself to some sort of intellectual statement on employment and work ethic. I now believe that the statement I was making was "yes, I am in fact king of all dorks." However, I still think its fun to sing the line "I listen to the finest worksong" WHILE listening to the "Finest Worksong" and I like to think it was intentionally written for everyone to smirk to themselves during that moment.