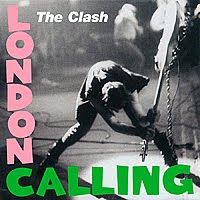 For most punk fans, the late 70's are the high water mark and without question The Clash has a lot to do with it. They released 3 full length albums and 2 EPs in the 70's and London Calling, released in December of 1979, fittingly slammed the door shut on the decade. This double album still contained the UK punk attitudes found on their earlier releases, but it also showcased some new styles and sounds that signaled their transition into the 80's. They messed around with reggae, ska, and rockabilly and Joe Strummer's non-conformist, anti-cookie cutter lyrics are just as biting and inspiring as they ever were. To call London Calling a classic album is a massive understatement, but still true nonetheless.

I'm sure I saw a Clash video here or there on MTV as a kid but I really got to know them through 99X, the alternative radio station I grew up on. 99X always played their bigger hits like "Rock The Casbah", "London Calling" and "Should I Stay Or Should I Go" but one of the DJs, Steve Craig, would play anything and everything by them. (As a side note, I can't accurately describe how big of an impact Steve Craig had on my musical evolution growing up. He had the coolest radio show called "The House Of Retro Pleasure" that played alternative, punk and new wave songs from the 70's and 80's and he is individually responsible for turning me on to so many cool bands over the years. I truly feel grateful and lucky for being able to listen to him for so many years and I'm sure his name will come up on this blog over and over again.) London Calling got a lot of love on 99X and "Clampdown" was no exception.

"Clampdown" is basically a call to arms to not settle for following the path that someone else has laid out for you. All through your life, but especially when you are growing up, people seem to have a lot of ideas and advice regarding what you "should" do and what you are "supposed" to accomplish. They'll have you believe that falling in line with the status quo will make everything work out fine. Pursue the "American Dream", get a job where your dad worked, don't ask questions, vote for your parent's political party and get to heaven on your grandmother's prayers. When you are not thinking for yourself is when you'll be "working for the clampdown". If you end up doing everything people told you to do, that would be a pretty boring, uneventful, unlived life. Who wants that? It's okay to have questions and to formulate your own individual thoughts about how you see, feel, live and experience life. Looking back, I have always seemed to ask the "why" questions. When I was a kid, I did it from an annoying, immature place. As I have grown up though, I have seen the "why" turn into a desire to know the motivation and reasoning for doing or feeling something and it has allowed me to understand and own my convictions, opinions, experiences and ideas. I'd like to think The Clash has played a small part in that. At minimum, they at least provide a nice soundtrack for my continuing journey.

"Clampdown" - The Clash (London Calling)
Posted by Will Hodge at 1:42 AM