"Bottom Of The World" - Tom Waits 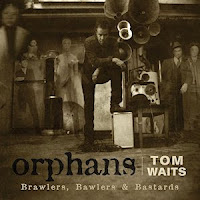 Ah yes, that voice. That gravelly, yet soothing, gin-soaked sound. Part velvet, part rusty car parts, Tom Waits has a voice that is uniquely and totally “him”. Initially it may not be your cup o’ tea, but I guarantee that if given the chance, it will grow on you. No one can weave a story like him either. His songs and monologues are filled with places, characters and situations that are somehow immediately visible in your mind. Singing mostly about the seedy, outcast, and downtrodden parts of society, he practically creates his own world that you can scarily find yourself in, whether you want to or not. Plus, he can write a train song like few others can so he’s got my vote. People often try to imitate the man, but there is only one Tom Waits.

Tom’s songwriting approach is usually to take a bunch of ugly ingredients and create something beautiful out of it. Not that the ingredients themselves always transform, but that through their mixture and experience, meaningful things rise to the top. Truth, redemption, love, learning and perspective are available for the song’s characters and the listener both. “Bottom Of The World” may be one of the best examples of a really sad song that is still somehow ridiculously beautiful. Take the first verse:

My daddy told me looking back

The best friend you'll have is a railroad track

You can picture this guy as plain as day. Brash, impulsive, regretful. Ever been there? Not only did he create an understandable character, he created a relatable character. Believe me, it’s easier said than done. The song goes on to describe what life has handed him; a surly cast of acquaintances, sitting around a campfire with a busted nose, and just plain being “lost at the bottom of the world.” So where’s the beauty come in you ask? Does he meet a pretty girl who straightens him out? Does he wise up and find his way home? Nope. In all the disappointment and sorrow lies one of the greatest descriptions of God I’ve ever heard in a song that wasn’t found in a hymnal. The final verse says:

God’s green hair is where I slept last

He balanced a diamond on a blade of grass

Now I woke me up with a cardinal bird

And when I wanna talk He hangs on every word

This isn’t a prodigal son story because the man doesn’t turn from his ways and head back home. He’s still right in the thick of the mess he has made. But he’s not there alone. God is there too, present and listening. God doesn’t have a responsibility to just magically make everything better, but He does promise that He is always with us and is always available to us. When you’re feeling lost at the bottom of the world, what better thing could you ask for?

As a side note, I’m not sure what the first Tom Waits song I ever heard was, but I do remember the first time I saw him. One of favorite movies growing up was “The Outsiders” and Tom had a quick scene as bar owner Buck Merrill. I love it when someone you love from one world pops up in another. Random coolness is the best kind!