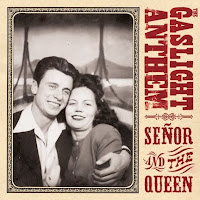 Of bands that have come out in the last few years, The Gaslight Anthem is probably my favorite. Man, there are not enough words to convey how awesome they are! These New Jersey boys know how to mix together the best elements of rock, punk, soul and blues to create an original sound full of energy and swagger. With their cranked guitars, powerful bass, relentless drums and intense vocal delivery, they invite you to join them for a high-energy, rock and roll tour de force that never lets up, even on the slower tracks. Lead singer, rhythm guitarist and main songwriter Brian Fallon is proud to wear his influences on his sleeve without ever falling into a lazy imitation of them. If you take just a cursory glance through his lyrics you’ll see his musical heritage on full display. It’s like a sonic treasure hunt! His heroes get lyrical winks, both obvious and subtle, in almost every song and it never comes across as forced or hokey. The man just knows how to write a good song and he draws from those who came before him who also knew what they were doing. The Gaslight Anthem is intent on constructing a rock and roll shrine while also adding their own bricks at the same time.

I was lucky enough to see them this past October at Mercy Lounge and they are ridiculously good live. Some bands have trouble recreating the magic in concert but they somehow upstaged their own record! Every song was tight, loud and full of emotion. The crowd, me included, was singing every word of every song at the top of their lungs. It’s hard to passively watch a Gaslight Anthem show. Even if you have never heard of them before, you’d somehow find your body moving and your fist in the air by the second or third song. They walked out on stage to “Should I Stay Or Should I Go” by The Clash, rocked us non-stop for a little over an hour and then closed with “Refugee” by Tom Petty and the Heartbreakers. It was the best show I’ve been to in a while, maybe best ever! The only drawback on the night was that Amanda was feeling horrible and only heard one song before having to go lay down in the car. I can’t wait to have the chance to see them again and hopefully be able to share it with her!

The Gaslight Anthem is currently in the studio finishing things up for their new album, American Slang, which is set for a June 15 release. I’m really looking forward to hearing some new stuff from them! Fingers crossed for a tour that finds its way to Nashville again! You can stream some of their songs, watch some of their videos and find out more about them at www.gaslightanthem.com. Go check ‘em out. You won’t be disappointed!

Although picking a favorite song of theirs is like picking a favorite breath of the day, here’s mine. “Say I Won’t (Recognize)” from their Señor and the Queen EP is a rocking tip of the hat to soul singer and Civil Rights pioneer Sam Cooke.

"Say I Won't (Recognize)" - The Gaslight Anthem (Señor and the Queen)