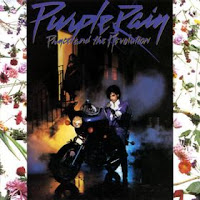 By 1984, Prince had already released 5 albums when he decided to try his hand at acting in Purple Rain. Although he wasn’t bad as “The Kid,” what he did on the soundtrack outshines the movie. Purple Rain contains some of his greatest stuff like “When Doves Cry,” “I Would Die 4 U,” “Let’s Go Crazy,” and an epic 8 minute version of “Purple Rain.” Never one to stick to any defined genre, Prince attempted to incorporate elements of R&B, pop, soul, rock, gospel, psychedelia, choral and orchestral music into “Purple Rain”. Recipe for disaster or musical genius? By the time he gets to the first chorus, there is no doubt that he knows what he is doing. Although the strings and some other minor overdubs were added later in the studio, the bulk of “Purple Rain” was recorded live and in one take at the legendary First Avenue club. This was quite unheard of in the 80’s, at least for an album not billed as “live”, as most record labels were looking for slick, polished recordings.

“Purple Rain” is a classic slice of Prince’s “Minneapolis Sound” but for me it will always be “the couple skate song.” The roller skating rink where I grew up, Sparkles, played a big part in my elementary and middle school years. School skating parties, Saturday hangouts, birthday parties and random summer days were all celebrated under the cheesy lights and carpeted walls of Sparkles. When it came time to light up the Couple Skate sign, which seemed to be about every hour on the hour, “Purple Rain” was the song of choice every third or fourth time, even years after the song came out. Every time those distinctive guitar chords rang out, the lights would dim and us poor schlubs would clear the rink for whoever was in a relationship that week. Since being husky, awkward and “grody” was not exactly pleasing to the ladies, I was always forced to watch this spectacle from the sidelines. But there was no single tear making its way down my chubby cheeks, oh no! I used this time for a variety of different tasks like placing a request with the DJ to play some Beastie Boys, grabbing some more Lemonheads from the concession stand, finding some new hiding places from the bullies two grades above me, or just pondering what exactly it meant to “bathe in the purple rain.” Even though I had countless opportunities throughout those years, sadly I never did get to couple skate to “Purple Rain.” I guess I’ll have to put it on my musical bucket list, right above “figure out all the lyrics to Frankie Smith’s ‘Double Dutch Bus.’”

Luckily my childhood shortcomings did not scar me from being able to still love this song. Such a classic! To save you some time and me some bandwidth, I’m posting the 7” single version of “Purple Rain” which is shorter and omits the piano and string sections at the end. I dare you to try not to sing along!