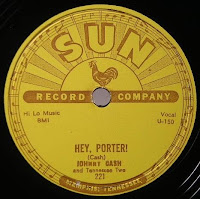 Put on your favorite black shirt because today is Johnny Cash’s birthday. He would’ve been 78 had he not passed away in 2003. Anyone not familiar with Johnny Cash should take some time and check out his life story. What a man and what a voice! My love for Johnny Cash, and any old-school country music for that matter, was passed down to me from my dad. He was born and raised in Texas and anytime spent in the truck with him involved either AM country radio or The Gaither Vocal Band. Thanks to him, I like to put on some Johnny, Hank, Waylon, Patsy, George, Merle, Willie, or Kris and think about how hard these guys worked in the ‘50’s and ‘60’s to get their music out. Especially the ones like Johnny who refused to fit into anyone’s box. My dad used to always make it a point to tell me how the “outlaws” would rather play their brand of music than conform to someone else’s pressures. Those Texans sure know a thing or two about pride.

“Hey Porter” was one of the first songs Johnny Cash recorded for Sam Phillips at the legendary Sun Records in Memphis. It was released as a single in 1955 and can be found on most of Johnny’s greatest hits collections. He wrote it on his way home from Germany where he was stationed in the Air Force. After years overseas, he was ready to get back to Arkansas and his love of the South can clearly be heard in the lyrics, just like many of his other songs. Also, I'm just a sucker for "train songs". The song can be about a train or even just mention a train and I'm immediately drawn to it. This is one of many "train songs" in his collection and just about no one does them better! His distinctive voice and guitar playing is what made him stand out to me as a child. No one sounded like him and no one played that “boom chicka boom” like him and his band. I’ve got a variety of DVDs from his concerts over the years and he never lost a step or tried to change things up. His songs sounded exactly the way they did 30-40 years ago when they first came out; simple, engaging and fun to listen to.

In the ‘90’s, producer Rick Rubin rekindled interest in Johnny’s career with a series of albums called American Recordings. Made up of unusual covers and imaginative originals, these albums are a great final chapter to his life. This week his final album, American VI: Ain’t No Grave, was released. Who knows if any other recordings lay in a vault somewhere; but if not, we’ve got a lifetime of his material to keep us singing. Here’s one of my favorites from the very beginning of his career.