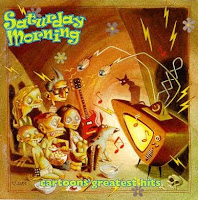 Hey, hey, hey! No matter how old I get, Saturday mornings will always be made for cereal and television. Sure Fruity Pebbles may need to be swapped out for All-Bran one day, but I’ll always strive to observe this hallowed ritual. Of all the great Saturday morning programming I’ve consumed during my lifetime, there are some that really stick out. Teenage Mutant Ninja Turtles, Pee-Wee’s Playhouse, G.I. Joe, WWF Rock N’ Wrestling, Saved By The Bell, Ewoks, Camp Candy, He-Man, The Smurfs, Ghostbusters, Transformers, A Pup Named Scooby Doo, and Monchichis, just to a name a few. One of those Saturday morning gems is engrained a little deeper though thanks to some serious reinforcement via the Clayton County public school system. Fat Albert and the Cosby Kids was a show that was as socially conscious as it was fun. Along side all the corny jokes and funky music were lessons about all sorts of issues like staying in school, respecting your parents, being honest, hanging out with the right crowd and staying away from drugs and guns. My elementary school seemed to have an unending collection of Fat Albert episodes and usually a week or two didn’t go by without us watching one. Especially if any specific issues came up in class! A kid who wrote on his desk might get us the vandalism episode, a cigarette found on school property might get us the smoking episode and there were multiple episodes that dealt with racism for any playground scuffles that may have ensued. Bill Cosby taught me quite a lot about good manners, tolerance, courtesy, and respect through his portly alter ego. Not to mention he showed me that making people laugh can charm the ladies, calm a situation or even keep you from getting beat up!

I’m pretty sure we were all clueless to the fact that we were watching reruns from the 1970’s, even though the clothes and music should’ve given it away! Almost every episode showcased the Junkyard Gang’s musical abilities via trash cans, brooms, bicycle tires, and discarded furniture and they could jam! I don’t think our teachers truly appreciated our creative pursuits when they found us hanging out in the dumpster area attempting to put together a Fat Albert tribute band. To this day I can still do a pretty good Mushmouth though.

In 1995 a cool CD called Saturday Morning Cartoon’s Greatest Hits came out. Its basically 19 tracks of alternative bands covering TV theme songs and there’s not a stinker in the bunch. It’s really fun to listen to and I highly recommend it! Replacing rusty car parts with loud guitars, here’s Dig with their take on the “Fat Albert Theme”.