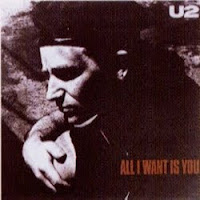 Well I might as well just start this thing off with a biggie. One of the greatest blendings of magical moment and music that I have ever had took place all the way back on November 26, 1997 at the Georgia Dome in Atlanta, courtesy of U2 and the coolest girl I have ever known.

But first, a little back story. As a kid growing up in the 80’s, most of my exposure to cool music was thanks to MTV. If a song had an interesting video, it boosted the chances of you liking the band, thereby causing you to bug your parents to buy their stuff. “All I Want Is You” by U2 was certainly no exception. This black and white video involving a circus on the beach, a trapeze swinger and a love struck little person with a bad haircut looked like some sort of French film a college student would take his artsy girlfriend to. In a sea of run-of-the-mill concert footage style videos, this one stood out like a mysterious, brooding sore thumb. The only sore spot I have with this video is that I still don’t really know who is supposed to have died at the end! But still, the seed had been planted enough that Rattle and Hum became the first U2 album I owned. Rattle and Hum was a split of live concert and studio cuts and “All I Want Is You” closed the album perfectly. Through years of listening to Rattle and Hum and the inclusion of “All I Want Is You” in Reality Bites, one of my absolute favorite movies of the ‘90’s, the seed was constantly getting watered. When I was in 8th grade I went to a friend’s basketball game and met this really cool, insanely funny girl named Amanda. We ended up going to the same high school and quickly became best friends. After YEARS of flirting I finally got the guts to ask her out our senior year and our first date was November 1, 1997. Once she hooked me, she really knew how to reel me in by getting tickets for us to see U2! This girl was good! So that brings us to the night of the concert.

Although we went with some friends, I’m pretty sure we were in our own little world the whole night. After going back to get something in the car, we (thankfully) missed the opener, Smash Mouth, which neither one of us liked anyways. We got to our seats while they were finishing setting up the stage for U2. (This was the PopMart Tour after all, so preparations had to be made for the GIGANTIC video screen, the 100 foot long martini olive and the mirrorballed lemon from which they emerged for the encore.) We had an awesome time rocking out to the fast ones, holding hands during the slow ones, laughing at the guy holding up his crutches while yelling “BONO!!!” and singing at the top of our lungs. Little did I know that they would pull out that, at the time, 9-year old gem “All I Want Is You” just for us! As soon as those muted chords started playing, I immediately knew that this song had been swirling around in me for so long because it was just waiting for the right girl to come along. Without hesitation I pulled Amanda close and wrapped my arms around her while we let the song play over us. It was one of THOSE moments. The kind that take up residence in you and end up getting retold at 50th wedding anniversary parties. I “may” have even serenaded her a little, without drowning out Bono of course! I’m pretty sure I didn’t even let her go through the next few songs.

Amanda and I will be married 10 years this May and this song has been with us the whole time. Whether we’re dancing in the living room, cozying up through the closing credits of the Rattle and Hum movie or putting it on mixtapes and ringtones, “All I Want Is You” is always showing up and will forever hold a special place in our relationship.